80% of Bhutan’s population live in rural areas where agriculture and subsistence farming is practised. Those living at higher altitudes breed cattle and yaks. Everyday life is heavily dominated by the seasons and by religion.

Bhutan is the only country in the world to have a Tantric form of Mahayana Buddhism (Drukpa Kagyu) as its state religion. Buddhism plays a vital role in the cultural, ethical and social development of the country. Religious festivals are an important part of Bhutanese life, and the landscape is dotted with religious sites and symbols. Every Bhutanese home has its own choeshum (altar room) for prayer, meditation and offerings.

Centuries-old forms of music and dance from the different regions of Bhutan survive to this day, loaded with sacred symbolism. The gentle grace of the folk dances and the dramatic gusto of the energetic, magnificent masked dances are bound to leave a lasting impression on any visitor to the country. Architecture, art and painting also depict the spiritual dimension of Bhutanese life, whether on walls, a roadside stone, a rooftop or one of the celebrated thangkhas or murals.

Bhutanese marriage can either be an informal affair or involve complicated ceremonies, depending upon the status of the family. For less well off families, the couple will start living together and declare themselves married, often not even announcing this publicly. There is no dowry in Bhutan. However, in some remote regions of the country, there is a system of giving wine, grains and slaughtered pigs as gifts to the bride’s parents. The people in the south follow the Hindu system of marriage.

The Bhutanese diet is rich in meat, poultry, dairy, grain and vegetables. The national dish is ema datse (chilli with cheese) which is very hot and spicy! If you are looking for dishes which aren’t spicy try kewa datse (potatoes with cheese) or shamu datse (mushrooms with cheese). Other national favourites are phaksha paa – a dish made of pork, chillies and vegetables; and tukpa – a kind of noodle soup.

Suja, salted butter tea, is served on social occasions. Locally brewed beer, chang, and spirit, ara, are also common, especially in eastern Bhutan. Doma is a delicacy made of betel nut with lime wrapped in betel leaf; it produces a red juice when chewed and is offered as a customary gesture of greeting. 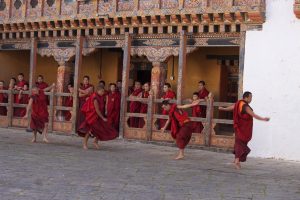 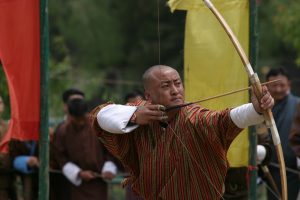 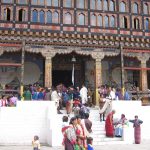