About four hours’ drive from Wangdue, after crossing the Black Mountain ranges via the Pele La Pass at 3420m, Trongsa district forms the hub of Bhutan and it was from here that the country was first unified. The route passes through Chendebji village, where mule caravans used to stop for the night on their journeys west from Trongsa during the reign of the second King. The Chendebji Chorten or Charo Kasho, a large white structure below the road and next to the river, is modelled on the Swayambhunath Buddhist temple in Nepal. It was built in the 19th century by the Tibetan Lama Shidha to cover the remains of an evil spirit killed at this spot. This Chorten is the westernmost monument in a ‘chorten path’ that was the route taken by early Buddhist missionaries between the west and east of Bhutan, ending at Chorten Kora in Tashi Yangtse.

The position of Trongsa town, at 2180m, is indicated by the view of the sprawling white Trongsa Dzong with its distinctive yellow roof. Most of the shop owners here are Tibetan immigrants of the early 1950s and 1960s, now assimilated into Bhutanese society to the extent that there is little indication of a distinct Tibetan presence in the town.

Above the Dzong is Ta Dzong, previously a watchtower, now renovated with a newly opened museum dedicated to the Wangchuk dynasty, which tells the stories of the Dzong and the valley it has watched over for centuries and features personal belongings of the Kings and Queens of Bhutan.

The Bumthang valley is often compared to Switzerland because of its beautiful landscape. Bumthang gets its name from the valley’s ‘vessel’ shape (Bumpa is a vessel which holds holy water and thang means a field or wide plain). Bumthang is actually comprised of four valleys: Chumey, Choekhor, Tang and Ura. The Chumey valley is wide and fertile, and wheat, barley, potatoes and buckwheat are cultivated here. It is famous for its famous woollen textiles known as Bumthang Yathra. Bumthang is the spiritual heartland of Bhutan, with many legendary temples, monasteries and palaces. This is the place where Guru Rinpoche first set foot when he came to Bhutan in the 7th century.

Jakar is the major trading centre of the region, and most of the hotels and services are found here. Shops and restaurants, many run by Tibetans, line the main street. The hospitality of Bumthang’s inhabitants is as renowned as its natural beauty, and you could easily spend many days here exploring this special area.

The Phobjikha Valley, a glacier valley in the Black Mountain National Park, is considered one of the most important wildlife sanctuaries in Bhutan. Every year between early November and mid February black-necked cranes, one of the rarest birds in the world, gather here from all over the Tibetan plateau to escape the harsh winters. According to estimates, there are around 200-300 cranes who reside in the valley, under the strict supervision of the Royal Society for Protection of Nature (RSPN). During their stay the villagers are not allowed to make loud noises or fish in the river that runs through the valley.

In addition to the cranes there are also muntjaks (barking deer), wild boars, sambars, Himalayan black bears, leopard and red foxes in the valley and surrounding hills. 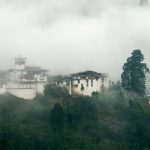