Lhuentse (the ancestral home of Bhutan’s royal family) is a remote district in north-eastern Bhutan which is culturally part of eastern Bhutan and only accessible by road from Mongar. On foot it can be reached from Trashi Yangtse with which it shares cultural heritage. It is one of the least developed districts and little visited by tourists.

Its interest lies mainly in the many weaving villages dotted through the region. Khoma is a typical example and within easy reach of the town. Here, unusually, the men will do the household tasks such as cooking and cleaning for their wives. Although traditionally this is all women’s work, things are done differently here so that the family can benefit from the income which can be made from the weaving activity. In the early days the women used to weave only for themselves and their families, but now they will take their products to Thimphu to sell and they can get high prices, as one piece of cloth can take up to 3 months to finish because of the intricate patterns.

The Mongar district forms the northern part of the ancient region of Kheng and is reached after 193 km and five hours’ drive from Bumthang through stunning scenery including a crossing of the Thrumshing La pass (3750m). Some of Bhutan’s finest woven textiles can be found in its villages. There is little to see in Mongar itself, however. The town was redesigned in 1997 when the eastern regional referral hospital was built so that patients did not have to travel all the way to Thimphu.

Most visitors just pass through on their journey east or west with little time to stop for sightseeing, but if you are in the area there are a few options of sights to visit.

Trashi Yangtse is 53km (2 hours’ driving) from Trashigang and borders the Indian state of Arunchal Pradesh. The small town is concentrated around the large Chorten Kora, and is famous for its wooden cups and bowls made using water-driven and treadle lathes; it is also a centre for paper manufacture and much of the local paper around Bhutan is made here.

Few western Bhutanese have visited Trashi Yangtse as it is so far east. Those that do are nervous at first because they find the atmosphere so different from what they are used to in the west of Bhutan, but once they have settled in they are often reluctant to leave!

Located at 1070m Trashigang is 92 km and four hours’ drive east of Mongar. Once an important centre of trade with Tibet, Trashigang is in the heart of eastern Bhutan. It is one of the largest towns in the region and the second largest district in Bhutan. Trashigang Dzong, built in 1667 by Mingyur Tebpa, is on a high promontory overlooking the confluence of the Drangme Chu and Gamri Chu.  It was the seat of control for the whole of eastern Bhutan from the late 17th until the beginning of the 20th century. Trashigang is also the main market for all the six districts in eastern Bhutan; people from Merak and Sakteng, a remote Eastern region stroll through the town with their unique yak-hair hats and distinctive costumes. Trashigang is home to many weavers and some of the finest raw silks can be found in villages like Radhi. 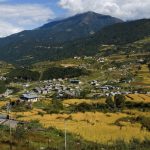