At an altitude of about 2200m nestled between the Haa and Thimphu valleys, the Paro valley derives its name from the classical ‘Padro’ meaning ‘beautiful’. It has some of the most fertile agricultural land in the country. Its famous red rice, apples, cereals, fresh vegetables and dairy products are substantial sources of income. The airport makes Paro an important gateway to Bhutan. The town centre established in 1985 contains shops, hotels, guest-houses, a bank, post office, several phone offices, a medical clinic and the district hospital.

Thimphu, Bhutan’s capital city since 1962 and the only world capital with no traffic lights, is just over an hour’s drive from Paro. Located in a wooded valley, it is home to Government offices, foreign missions, development projects and businesses. Modern development has led to a well established infrastructure and good services, but Thimphu continues to display a strong national identity which is very much in evidence, for example in its traditional architecture.

Haa, a remote district near to Paro, is the second least populated district in Bhutan (after Gasa).  It is a predominantly rural district and the main crops grown in the valley are wheat and barley, although some rice is also grown in the lower reaches of the valley. Potatoes, chillies, apples and other cash crops are grown by farmers and almost every household in the district owns livestock of some type, most commonly yaks and cattle, but also chickens, pigs, and horses.  78% of Haa is covered with forest, and forestry plays an important part in the local economy.

Punakha valley is about 76 km or two and a half hours’ drive from Thimphu via the Dochu La Pass (3050 m), which has spectacular panoramic views of the Himalayas and Gasa Dzong. The altitude of this region is around 1250 m and the climate is relatively warm, allowing two rice harvests a year as well as abundant orange and banana trees.

Wangduephodrang (known colloquially as Wangdue), located at 1310m, is about half an hour’s drive from Punakha and is the easternmost district of western Bhutan.  Wangdue Dzong was sadly very badly damaged in a fierce fire that broke out in 2012 and renovation will be ongoing for several years to come. The inhabitants of the old town have also recently been relocated to a new spot further down the valley and Wangdue itself now holds little of interest for visitors. 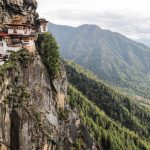 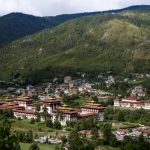 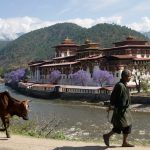