The people of Bhutan are composed of three main ethnic groups: the Sharchops of the East, the Ngalops of the West and the Lhotshampas in the South. Together, they form the indigenous population known as the Drukpas, famed for their rugged strength, ready sense of humour, hospitality and friendliness.

This diversity in ethnicity, as well as the geographic isolation of Bhutan’s highland villages, has resulted in the emergence of about 19 different languages and dialects spoken by different ethnic groups around the country. The national language of Bhutan is Dzongkha, but schooling is done in English, which is widely spoken.

Bhutan has never had a rigid class system. Social and educational opportunities in the country are open to all, and Bhutanese men and women enjoy equal rights in every respect. Indigenous culture is kept alive by wearing traditional clothing. Men wear a gho, a long robe hitched to the knee, tied around the waist by a small belt called a kera, while women wear a kira, an ankle-length robe also held in place by a belt. Both the gho and kira are made from beautifully coloured and finely woven fabrics with fascinating traditional patterns on them. The Bhutanese are fond of heavy gold and silver jewellery decorated with pearls, turquoise and precious stones known as dzee, or the ‘tears of the gods’. 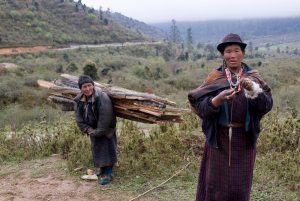 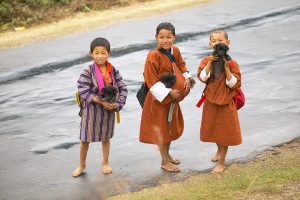 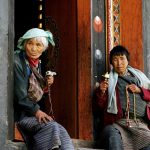