Religious festivals, known as tsechus, are an intrinsic part of Bhutanese cultural life and are observed throughout the year across the kingdom. The most popular are Punakha festival which takes place each year in February or March, Paro festival which falls in March or April, Ura festival in April or May, Thimphu festival in September or October and Jambay Lhakhang festival (also known as Bumthang Drup) which is in October or November each year.

Dedicated to Guru Rinpoche (Padmasambhava) and other protective deities (such as Yeshe Gompo or Palden Lhamo), religious festivals symbolise friendship, peace, reverence and compassion. The Tsechu festivals showcase the kingdom’s best religious dances dating from the Middle Ages, performed only once or twice a year by monks and laymen. People from all walks of life assemble in their finery to watch masked dances and rituals, to socialise and to rejoice. 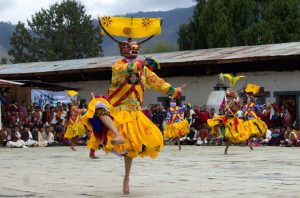